St. Enodoc Golf Club - So you know all about Stableford Scoring ?

Q2: A and B are partners in a four-ball Stableford competition. During the play of the 15th hole they realise that they exchanged balls during play of the 14th hole. What is the ruling?

a) There is no penalty as they had already commenced play of the 15th hole.

b) They both incur a penalty of two strokes at the 14th hole.

c) They are both disqualified for the 14th hole.

d) They are both disqualified from the competition, as they did not finish out the 14th hole with their original balls.

Q3: A player takes 4 strokes on a par 5 hole for which they do not have a handicap stroke. How many points do they score in a Stableford competition? 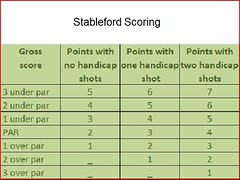 Q4: A player with a handicap of 14 inadvertently returns his Stableford score card to the Committee with a score of 6 at the 3rd hole when his score for the hole was actually 7. The index of the 3rd hole, a par 4, is 16. The player is disqualified. True or False?

A4: False. Decision 32-2a/4. No penalty is incurred, as the lower score recorded did not affect the result of the hole; the player could not score any Stableford points with either a 6 or a 7.

Q5: In a Stableford competition, a scratch player (handicap of 0) who has already taken 5 strokes on a par 4 must pick up their ball, or they will be penalised for making practice strokes. True or False?

A5: False. Rule 7-2. Strokes made in continuing the play of a hole, the result of which has been decided, are not practice strokes.

Q6: In Stableford competitions, the competitor who has the lowest score at a hole always takes the honour at the next teeing ground. True or False?

A6: False. Rule 32-1. It is the player with the lowest net score at a hole that takes the honour. If two players have the same net score the honour is the same as on the previous hole.

Q7: In a Stableford competition, a player had scored one point on each of their first three holes when it was discovered that they had 15 clubs in their bag. If they scored 2 points on each of the remaining 15 holes, what would their total score be for the 18 holes?

Q8: A Committee may penalise any player who does not enter their points score for each hole in a Stableford competition. True or False? 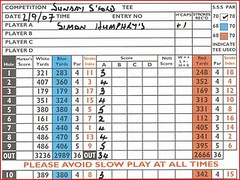 This quiz is courtesy of http://www.RhodesRulesSchool.com